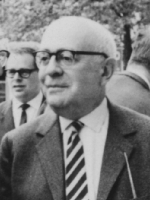 Theodor Wiesengrund Adorno was born in 1903 in Frankfurt am Main. He studied Philosophy, Sociology, Psychology and Music Theory and gained his Ph.D. in 1924 on Husserl’s phenomenology. In 1931 he qualified as a professor with a work about Kierkegaard. Until 1933 Adorno was an assistant professor in Frankfurt am Main, then the National Socialists withdrew his teaching permit from him. He emigrated in 1934, firstly to Oxford and then in 1938 to the USA, where he became the official member of the Institute for Social Research, which had transferred to New York. From 1942 he lived in California, where together with Max Horkheimer he worked on the Dialektik der Aufklärung. (title of the English translation: Dialectic of Enlightenment). In 1949 Adorno returned from his American exile to Frankfurt and continued to teach here. He also wrote many theoretical works. In 1958 he took on the management of the Institute for Social Research in Frankfurt am Main; in addition to Max Horkheimer and Herbert Marcuse he is regarded as the main representative of the Frankfurt School and of Critical Theory. Theodor W. Adorno died of a heart attack in 1969 in Brig (Switzerland).