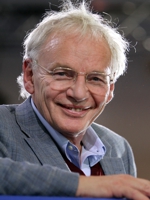 Götz Aly was born in 1947 in Heidelberg. He had visited the German School for Journalism in Munich before he studied history and political sciences in Berlin. He earned his PhD and professorship at the Otto Suhr Institute in Berlin. Aly is the author of important publication on social politics and on the history of the National Socialism. He was an editor at the taz and Berliner Zeitung daily newspapers. Today he is a freelance writer. From 2004 to 2006, he was the visiting professor for multidisciplinary research of the Holocaust at the Fritz Bauer Institute in Frankfurt. Subsequently, he was appointed for five years in the board of trustees of the Jewish Museum in Berlin. In the winter semester of the 2012/13 academic year, he lectured as a fellow of the Sir Peter Ustinov program at the University of Vienna. In 2002, he received the Heinrich Mann Prize, in 2003 the Marion Samuel Prize, in 2007 he received the Order of Merit of the Federal Republic of Germany, and in 2012 the Ludwig Börne Prize.