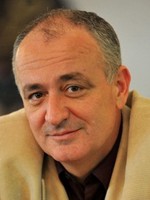 Venko Andonovski was born in 1964 in Kumanovo, Macedonia, and studied philology in Skopje and Zagreb. He teaches at the Ss. Cyril and Methodius University of Skopje. Andonovski wrote several novels, theatre plays, and scientific texts and is also a translator and columnist. His novel Папокот на светот [The Navel of the World] was awarded the international Balkanika prize and became the absolutely best-selling book of Macedonian literature. Andonovski is member of the Macedonian Writers’ Association and of the Macedonian PEN Centre.