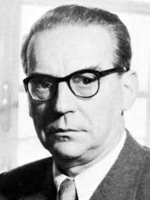 Ivo Andrić was born in 1882 in Travnik (Bosnia and Herzegovina). He studied Slavonic Studies and History in Zagreb, Vienna, Krakow and Graz, where he received his doctorate in 1924. At the beginning of the 1920s he took political office. He represented his country in Rome, Bucharest, Trieste, Genoa, Madrid and Berlin. He later returned to Belgrade to work on his novels.

Ivo Andrić first wrote poems and stories, until he became world-famous in 1945 through the publication of the three great novels Na Drini ćuprija [The Bridge on the Drina], Gospođica [The Woman from Sarajevo] and Travnička hronika [Bosnian Chronicle]. He received the Nobel Prize for literature in 1961. He died in Belgrade in 1975.