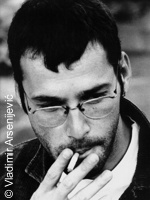 Vladimir Arsenijević, born in 1965 in Pula, is an award-winning and renowned Serbian writer and cultural worker. He won the 1994 NIN Award for his first novel In the Hold (U potpalublju), becoming the youngest ever recipient and the novel the first debut ever to receive this award. This anti-war book was soon translated into more than 20 languages. Since then, Arsenijević published ten other novels, graphic novels, and collections of essays. In 2000, he formed RENDE publishing house, where he worked as its Editor-in-Chief until 2007. From 2007 until 2011 he ran a Belgrade subsection of distinguished Croatian publishing house VBZ. He is the founder and president of KROKODIL (2009) which runs one of the most distinguished literary festivals in the region as well as a Writer-in-Residence programme and, as of recently, also the KROKODIL Center for Contemporary Literature. He lives and works in Belgrade.