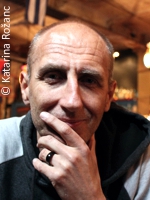 Esad Babačić, writer and the singer of the legendary punk band Via ofenziva, is one of the best-known and most original representative of the Slovenian literary scene. He is author of numerous books and poems, for which he received many awards. In 2003, he received the Hörbiger Prize in Austria for his poem Donava. Translations of his text have been published in all major European languages, among others in magazines Die Batterie, Literatur und Kritik and Edinburgh Review.