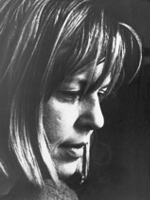 Ingeborg Bachmann, born in 1926 in Klagenfurt, is regarded as one of the most important German-speaking lyricists and writers of prose of the 20th century. In 1946, when she first started studying philosophy she published her first story, “Die Fähre” [The Ferry]. From 1951-1953 she was Editor of the Red-White-Red network in Vienna, then lived temporarily as a freelance writer in Italy. At the invitation of Harvard University in Cambridge she took part in an international seminar of the Harvard Summer School of Arts and Sciences and of Education. From 1957-1958 she worked as a dramatic adviser at Bayerisches Fernsehen (Bavarian Television) in Munich and in 1959 became a member of the German PEN Centre. Ingeborg Bachmann has received numerous prizes, including the German Critics’ Prize, the Georg-Büchner-Prize and the Major Austrian State Prize for Literature.