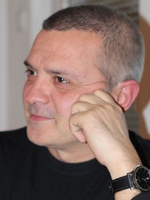 Anton Baev, born in 1963 in Plovdiv, studied literature. In 2009, he obtained his PhD from the Literary Institute of the Bulgarian Academy of Sciences. He is author of numerous books and received several awards for his works. His works include poetry books, novels, volumes of short stories, monographs and a philosophical fragment. Most recently, he received the prize Razvitie for his novel Светата кръв published in 2016. Translations of his works have been published in English, German, Spanish, Turkish, Greek, Macedonian, Albanian, Serbian, and Russian.