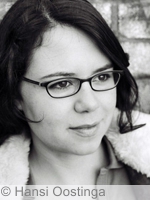 Milena Baisch was born in 1976 in Bochum. Since 1995, she has been writing children’s books, at first above all for reading beginners and small children. From 1998 to 2000, she studied screenplay writing at the German Film and Television Academy in Berlin. Since then, she has also been writing scripts for film and television. In 2007, her first novel for young readers Blumen im Bauch was published. She received several awards for her books, among other the German Youth Literature Prize for Anton taucht ab.