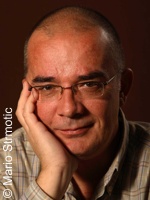 Renato Baretić was born in Zagreb in 1963 and has worked as a journalist since 1983. He moved to Split in 1993, and is one of Croatia’s most important columnists and also Croatia’s most-read author. In 1998, he published his first poetry anthology Riječi iz džepova. Five years later, his first novel appeared under the title Osmi povjerenik, and received five literary awards: the Vladimir Nazor Award, the August Šenoa Award, the Ivan Goran Kovačić Award, the Ksaver Šandor Gjalski Award and the Kiklop Award. The novel Osmi povjerenik has been translated into Slovenian, Macedonian, and Serbian. His other novels, Pričaj mi o njoj (2006) and Hotel Grand (2008) became bestsellers in Croatia.