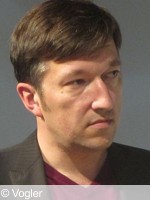 Lukas Bärfuss, born in 1971 in Thun (Switzerland), is regarded  as one of the most successful contemporary dramatists. His plays are performed worldwide and played on the main stages in Germany and Switzerland. He has received numerous prizes for his work, including the award “Dramatist of the Year” from the journal Theatre today, and the Mühlheimer Dramatists Award for his play Der Bus [The Bus]. He published his first prose work, the short story Die toten Männer [The Dead Men], in 2002. His first novel appeared in 2008 under the title Hundert Tage [One Hundred Days]. Lukas Bärfuss lives with his family in Zurich.