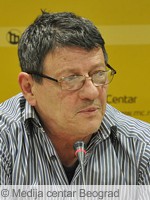 Svetislav Basara, born in 1953 in Bajina Bašta close to the Bosnian border, is one of Serbia’s most renowned and successful authors abroad. He made his debut with his first novel Priče u nestajanju. Since then he has published more than twenty novels, stories, and critical writings, and has been awarded numerous esteemed literary prizes. His work has been translated into many foreign languages. His most famous novel Fama o Biciklistima (The Cyclist Conspiracy) from 2012 was compared by some US-American critics to the works of Jorge Luis Borges, Thomas Pynchon, and Umberto Eco. Basara lives with his wife and two children in Belgrade.