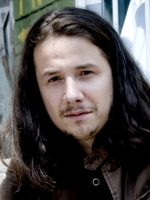 Muharem Bazdulj, born in 1977 in Travnik, studied English and Anglo-American studies at the Faculty of Philosophy at the University of Sarajevo. He then went on to work as a journalist and editor. He writes essays, short stories, novels and poems. In 2000, in recognition of his second collection of short stories entitled Druga knjiga, he received the Soros Foundation ‒ Open Society BiH Award for best collection of short stories. His works have been translated into Polish, English and German. Among other, he has published several articles in foreign language anthologies for which he has received numerous awards.