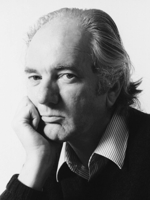 Thomas Bernhard, who was born in 1931 in Heerlen (Netherlands) and grew up in Southern Bavaria and in the Salzburg area, is one of the most important Austrian writers. His grandfather, the writer Johannes Freumbichler, was a big influence during his childhood. When he was 16 he became ill with tuberculosis, which is why even at an early age, he looked into the subject of death. From 1955-1957 he studied dramaturgy and acting in Salzburg. Thomas Bernhard firstly published several volumes of poetry. His literary breakthrough came in 1963 with the novel Frost. Other novels and stories soon followed and from 1970 he also made a name for himself as a playwright. He received numerous prizes, including the Georg Büchner Prize (1970), the Premio Mondello (1983) and the Prix Medicis (1988). Thomas Bernhard died in 1989 in Austrian Gmunden.