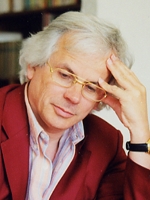 Peter Bieri, born in 1944 in Bern, studied Indian and English studies, philosophy, and Greek language in London and in Heidelberg. After obtaining his doctorate in 1971 and after his research stays in Berkeley and Harvard (1973–1975), he became professor at the university of Heidelberg in 1981. He taught in Hamburg, Heidelberg, Berlin, Bielefeld and Marburg until 1993 when he became professor of philosophy at the Free University of Berlin. Beside numerous works on the philosophy of mind, with cognition and with language, he also writes novels under his pen name Pascal Mercier. In 2004, he published the bestselling novel Night Train to Lisbon.