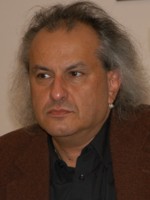 Boris Domagoj Biletić, born in 1957 in Pula, studied Croatian and Southern Slavic Philology in Zagreb. In the 1970s he published initially poems, literary reviews, meditations, studies and translations. His poems have been included in anthologies of Croatian poetry and translated into many languages. Boris Domagoj Biletić is a member of the Association of Croatian Writers (DHK), of the Croatian P.E.N. Centre, editor of a series of books, initiator and Chief Editor of the journal for literature, cultural and social topics Nova Istra and initiator of the international essay days “Pulski dani eseja”. He has received numerous literary prizes and awards for his works, including “Mlada Struga”, “Tin Ujević”, “Julije Benešić”, the prize of the Association KulturKontakt, the Order of Danica Hrvatska with the effigy of Marko Marulić and the Medal of the City of Rovinj. Boris Domagoj Biletić lives and works in Rovinj, where he runs the “Matija Vlačić Ilirik” city library.