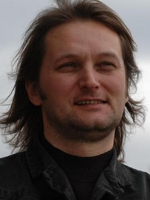 Laslo Blašković, born in 1966, is a Serbian poet, novelist, translator and essayist. Up until now he has published five novels, four of which have been honoured – he received the prize for the Novel of the Year from the Literature Society of Vojvodina for Svadnebi marš [The Wedding March] (1997), the award from the “Borislav Pekić” foundation for Madonin nakit [The Jewels of Madonna] (2003), the award of the Serbian Academy of Science and Art from the “Branko Ćopić” foundation for the best novel of the year for Adamova jabučica [The Throat oh Adam] (2005) and the “Stevan Sremac” award for the prose book of the year for  Turnir grbavaca [The Tournament of the Hunchbackers] (2007). His works have been translated into many languages. Blašković lives in Novi Sad.