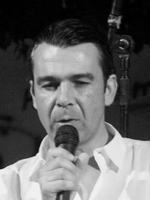 Michel Božiković was born in 1971 in Zurich. He studied philosophy, political science and journalism in Konstanz and Zurich. Between 2000 and 2006, he had his own recording studio and record label and ran a publishing house. He worked as a skipper and as a copywriter and concept developer. In 2011, he published his debut novel Drift, which earned him a nomination for the Ingeborg Bachmann prize in the same year.