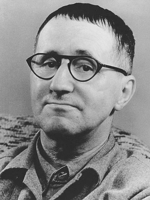 Bertolt Brecht, born in 1898 in Augsburg, studied Natural Sciences, Medicine and Literature in Munich. He had to interrupt his studies in 1918, as he was employed as a Medical Corps soldier in a military hospital in Augsburg. He had already begun to write plays while he was studying. From 1922 he worked as a dramatic adviser for the Munich chamber plays. From 1924 to 1926 he was Director at the German Theatre in Berlin. In 1933 he left Berlin and fled via Prague, Vienna and Zurich to Denmark, where he stayed for the next five years. Apart from dramas Brecht also wrote articles for several emigrant journals in Prague, Paris and Amsterdam. In 1948 he returned from exile to Berlin, where he worked as an author and stage director until his death. Bertolt Brecht died on 14th August 1956 in Berlin.