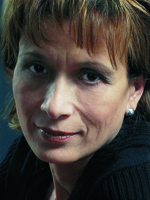 Diana Burazer was born in Zagreb in 1953. She went to school in Pleternica (Slavonia) and Ljubuški (Bosnia and Herzegovina), studied Mathematics in Zagreb and then lived in Mostar, Bosnia, up to the outbreak of war in 1992. Since then she lives and works in Zagreb. So far, Diana Burazer has published six volumes of poetry, her poems have been translated into numerous languages. She is a member of the Croatian Writers ‘Association, the Croatian P.E.N. Club and the Writers’ Association of Bosnia and Herzegovina.