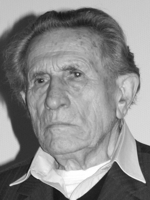 Adolf Burger, born in 1917 in what is today Slovakia, is a skilled book printer and typesetter. In 1942, he and his wife were deported to Auschwitz, and two years later were ordered to go to the counterfeiting factory KZ Sachsenhausen, where large sums of money and documents were forged. After being freed by the Allies, Burger returned to Czechoslovakia and now lives in Prague.

Adolf Burger recorded his memoirs in a book, which appeared in 1992 under the title Des Teufels Werkstatt [The Devil’s Workshop]. In 2006, a movie, Die Fälscher [The Counterfeiters], which was based on the book, was released. It was the first Austrian movie to receive an Oscar for “Best Foreign Film” in 2008.