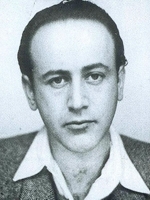 Paul Celan was born in 1920, the son of German-speaking, Jewish parents in former Romanian Czernowitz. After ‘A’ Levels he began studying medicine in France, but after a year returned to Romania to embark on Romance languages studies there. In 1942 his parents were deported. His father died of typhoid in a concentration camp, his mother was shot. From 1942 until 1944 Celan had to do forced labour in various Romanian labour camps. From 1945 until 1947 he worked as a proofreader and translator in Bucharest, and his first poems were published. In July 1948 he moved to Paris, where he lived until his suicide in Spring 1970.