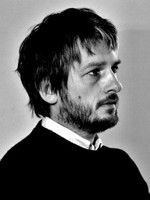 Primož Čučnik, born in 1971 in Ljubljana, studied cultural philosophy and sociology. He is one of the most important Slovenian poets of the younger generation. Until now he has published seven volumes of poetry. In 1999 he received the prize for the best lyrical first work for his first book Dve zimi [Two Winters]. In co-authorship he translated a series of important contemporary poets from Polish and English. Primož Čučnik is Editor of the journal Literatura and is also Editor and Founder of the paperback publishing house, Šerpa. He lives and works in Ljubljana.