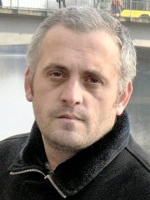 Beqë Cufaj, born in 1970 in Deçan (Kosovo), studied Linguistics and Literature in Prishtina and went to Germany after completing his studies. When the Kosovan war began in 1999, he published literary essays in well-known German daily newspapers. After the end of the war he returned to his homeland for six months in order, as director of the feature pages to take part in the reconstruction of the newspaper KOHA Ditore. He has been living in Germany again since 2000, where in addition to his writing activities he also works for international newspapers (including the Frankfurter Allgemeine, Süddeutsche, Die Zeit, Courrier International). In 1996, Beqë Cufaj published a volume of short stories and poems under the title 205 (published by Dukagjini, Peja). His first novel Shkëlqimi i huaj was published in Prishtina in the autumn of 2003.