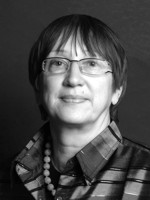 Milena Dragićević Šešić, born in 1954 in Trogir, Croatia, heads the UNESCO Chair in Cultural Policy and Cultural Management at the University of Arts in Belgrade, where she is a professor of Cultural Policy, Cultural Management and Cultural and Media Studies. From 2006 to 2007 she was a consultant of the Ministry of Culture of the Republic of Serbia. She has also worked as an expert for several international institutions, such as for UNESCO, the Council of Europe, the European Cultural Foundation, the Open Society Institute, Pro Helvetia and the British Council. Dragićević Šešić is the author of numerous books and essays on arts management, cultural policies and intercultural relations and has been involved in more than 50 projects in the field of cultural policy and management in South Eastern Europe, as well as in the EU member states and other countries in Europe, the Mediterranean, the Caucasus, Central Asia and India.