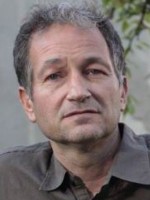 Aleš Debeljak, born in 1961, studied Philosophy and Comparative Literature in Ljubljana and obtained his Ph.D. at the Maxwell School of Syracuse University in New York. He is Professor for Cultural Studies at the Faculty for Social Sciences at the University of Ljubljana and is a regular guest professor for Balkan researches at the College of Europe in Warsaw. In 2005/2006 he was guest professor at the Northwestern University in Chicago. Aleš Debeljak is one of the most translated Slovenian poets of the present. His work includes numerous volumes of poems and essays, as well as anthologies and translations. He has received several Slovenian, Yugoslavian and international prizes, including the Prešern Prize, the highest cultural award of Slovenia.