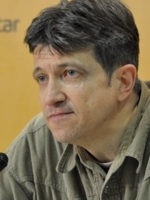 Bojan Tončić, born in 1967 in Leskovac, is a Serbian journalist. After having worked for years for the newspaper Danas, he is now commentator and regular contributor for Diskriminacija.ba (Sarajevo), Lupiga (Zagreb), and Helsniška povelja (Belgrade). He also publishes in Jedinstvena BiH, Radio Sarajevo, Express, Koha ditore from Pristina, and other media in the area of former Yugoslavia. Tončić, who has already been imprisoned because of his journalistic work, has been awarded with several prizes for the quality of his work, including with the Dušan Bogavac Prize for journalistic courage and ethics. The prize is awarded by the Independent Journalists’ Association of Serbia.