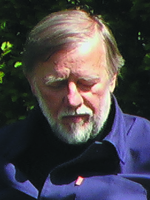 Ottó Tolnai was born in 1940 in Kanizsa (Serbia), in the Hungarian part of Vojvodina, He studied Hungarian  and Philosophy at Novi Sad and Zagreb universities and now lives in the Vojvodian city of Palics.  His first poetry anthology Homoru versek appeared in 1963. He began working for the independent literary journal Uj Symposion in 1965, where he later became Editor and Manager until the journal was prohibited in 1972. He has published the journal Ex Symposion since 1993. Ottó Tolnai has received numerous awards for his lyrics, prose, dramas and essay.