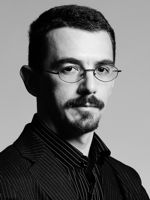 Srđan Tešin was born in 1971 in Mokrin (Serbia). He is a writer and journalist. His novels and stories have been translated into many languages; in 2004 he was awarded the prestigious Borislav Pekić literary award for his works. Tešin has been a member of the Canadian Writers’ Association since 1997 and a member of the Serbian Literary Society since 2007. He has also been a member of the Independent Journalists’ Associations of Vojvodina and Serbia since 2000. He edits the literary magazine Severni bunker, is a columnist on the Novi Sad newspaper Građanski list and editor of the online portal e-novine.com. Srđan Tešin lives in Kikinda.