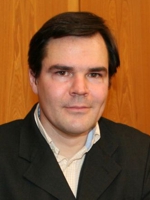 Uwe Tellkamp was born in 1968 in Dresden. After he had served his military service in the National People’s Army of GDR, he was excluded from his study of medicine due to “political unreliability” and was imprisoned in 1989 during the so-called “turnaround”. After the reunification of Germany, he continued his studies in Leipzig, New York and Dresden. After graduation, he worked as a doctor at an emergency clinic in Dresden. He is living in Dresden as a writer. He received the German Book Prize in 2008 for his novel Der Turm.