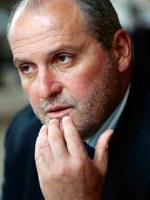 Veton Surroi was born in 1961 in Pristina, Kosovo. In the year 1982 he completed his studies at the Faculty of Philosophy and Literature at the National Autonomous University of Mexico (UNAM); after that, he then began work as an editor at the Albanian daily newspaper Rilindja. In 1989, he established the first opposition group in Kosovo, the Kosovar branch of the “Yugoslav Democratic Initiative” (UJDI). In 1990, he founded the independent weekly newspaper KOSA, in 1997 he founded KOHA Ditore, which has since then been the leading daily newspaper in Kosovo, and in 2000, he established the TV station KTV. In 1999, he was one of the signatories of the Rambouillet Agreement on Kosovo, and between 2005 and 2007, he took place in the Vienna negotiations as the independence of Kosovo was discussed. He was also a member of the Kosovar parliament and the president of the reform party ORA. He received many awards for his work as a journalist and politician, among other the prize of the International Federation of Journalists (IFJ) in 2000 and the Dutch peace award – the Geuzen Prize.