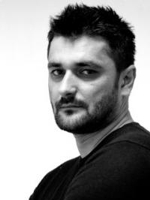 Emir Suljagić, born in 1975 in Ljubovija (Serbia), along with thousands of fellow Bosnians, took refuge in Srebrenica in April 1992, where he experienced the siege of the UN safe area and the murder of almost all male inhabitants by Serbian troops. After the war, he studied political science at Sarajevo University. He worked as a correspondent for the weekly journal Dani which appeared in Sarajevo, and also as a research fellow at the Institute for Peace Research and Security Policy at the University of Hamburg. He published his experience in Razglednica iz groba (title of English translation: Postcards from the Grave), which was translated into seven languages.