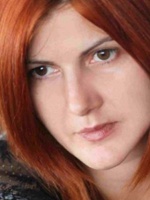 Tanja Stupar Trifunović, born in 1977 in Zadar, studied at the Faculty of Philology in Banja Luka. She has published four books of poetry, a novel and a collection of short stories. Her texts have been included into several anthologies. She received many awards, among others the European Union Prize for Literature 2016 for the novel Satovi u majčinoj sobi. Her works have been translated into English, German, Polish, Slovene, Macedonian, Danish and French. Tanja Stupar Trifunović is an editor at the magazine for literature, arts and culture Putevi and works as a manager of the cultural program at the General and University Library of Banja Luka.