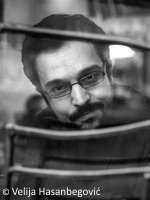 Igor Štiks, born in 1977 in Sarajevo, studied comparative literature and philosophy in Zagreb and did his PhD in Paris and Chicago. He writes fiction, essays, literary critiques, amd newspaper texts. His debut novel Dvorac u Romagni (translated into English as A Castle in Romagna) was published in 2000. His second novel Elijahova stolica (translated into English as The Judgment of Richard Richter) was published in 2006, followed by a book of poems Povijest poplave [History of a Flood, 2008], and a political essay Pravo na pobunu [The Right of Rebellion, 2010], written together with Srećko Horvat. For his novels, which have been translated to many languages, he received numerous awards.