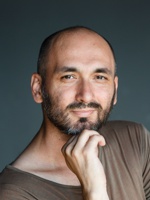 Jean-Lorin Sterian, born in 1975 in Constanta, is a Romanian writer, director of documentaries and short films, artist, and performer. In 2008, he received the theatre prize DramAcum. In the same year, he opened in his apartment the “lorgean theatre” ­– the first living room theatre in Romania that soon became an open space for actors and choreographers and an important meeting place for alternative artists in Bucharest. As a performer, he was involved in projects for the Venice biennale. He also staged his own The parasite socks project there. Since 2014, he has been curating the art festival HomeFest that is taking place in private houses and apartments.