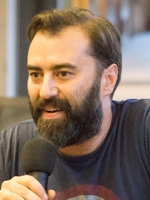 Bogdan-Alexandru Stănescu, born in 1979, is literary critic and writer. He studied Romanian literature and concluded his study with a PhD. He is an assistant lecturer at the University of Bucharest. He is the founder of the international literary festival FILB in Bucharest and coordinated for 11 years the publication of literary translations published within the Biblioteca Polirom series. For the last 16 years, he has been regularly writing literary critiques, which are currently published weekly in the renowned literary magazine Observator cultural. He is a published author of two books of essays and two poetry books, his stories have been included into various collections, while he has also translated works by Tennessee Williams, James Joyce, Sandra Newman and Alberto Manguel. In 2015, Bogdan-Alexandru Stănescu received the prize for the best young Romanian writer of the year.