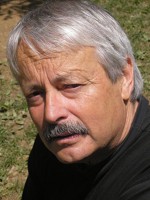 Slobodan Šnajder was born in Zagreb in 1948. He studied Philosophy and English at the University of Zagreb. Šnajder was the long-standing editor-in-chief of the Yugoslavian theatre magazine Prolog. Since 1994 he has been working as a columnist for the daily newspaper Novi List. Between 2001 and 2004 he was the director of the Zagreb Youth Theatre. He has been working as a writer since 1966, publishing prose and essays, but mostly focusing on theatre plays. His most renowned play internationally, Hrvatski Faust [The Croatian Faust], was staged at the Theater an der Ruhr in Mülheim in 1982 and at the Burgtheater in Vienna in 1993. Many of his other plays have been published and put on stage in German-language countries. Between 2005 and 2007 the Cultural Ministry enabled the publication of Šnajder’s complete work through the Zagreb publisher Prometej. His novel Doba mjedi won the Meša Selimović prize for the best novel of 2015 as well as several other prizes.