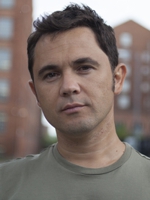 Roman Simić, born in 1972 in Zadar, studied comparative literature and Spanish studies in Zagreb. He was the editor of an important Croatian literary magazine Quorum. He is the organizer and program director of the renowned Festival of the European Short Story. He is the two-time winner of the Goran Prize for young poets. His stories have been translated to French, Spanish, Swedish, Slovenian, Polish, Bulgarian, Serbian, Lithuanian, and English. For his books U što se zaljubljujemo and Nahrani me he received the prize of the daily newspaper Jutarnji List for the best Croatian prose work in 2005 and 2012, respectively.