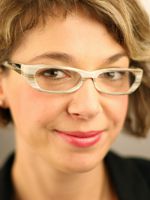 Ivana Simić Bodrožić was born in 1982 in Vukovar. She studied Croatian Literature and Philosophy in Zagreb. She published her first volume of poetry in 2005; since then her poetry has been printed in international literary magazines and anthologies. She has received several prizes, including the Kiklop Prize (2010) for her debut novel Hotel Zagorje (Hotel Zagorje).