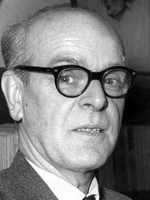 Meša Selimović, born in 1910 in Tuzla, is one of the most important writers of the former Yugoslavia. In the 1930s he studied Serbo-Croatian language and Yugoslav literature in Belgrade. The first years of the war he spent in Tuzla, later he fled to the freed territories and joined the partisan forces. From 1947 on, he was living in Sarajevo. In the same year, his first book Uvrijeđeni čovjek was published, followed by many works. The international break-through came in 1966 with his most successful novel Derviš i smrt (Death and the Dervish), which earned him several Nobel Prize nominations. In 1971, Meša Selimović moved to Belgrad where he died in 1982.