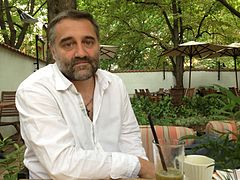 Aleksander Sekulov, born in 1964 in Plovdiv, studied Bulgarian Language and Literature. His publications include several volumes of poetry, a collection of essays, stories, novels and a stage play. Besides literature he also devoted himself to journalism and took an active part in the social and cultural life of his native city. He has received a series of awards for his literary work: Akademika, Cvetan Zangov, Ivan Nikolov, Literary Prize of the city of Plovdiv, the journalism prize of the city of Plovdiv. His works have been translated into English, Hungarian and Serbian. The novel Колекционер на любовни изречения was nominated for the 2008 Vick Prize.