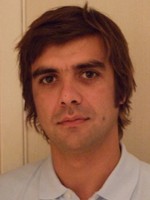 Bekim Sejranović (1972-2020) was a writer and translator born in Brčko, Bosnia and Herzegovina. He studied Croatian Language and Literature in Rijeka. He moved to Norway in 1993, where he gained a master’s degree in Southern Slavic Literature. He lived in Ljubljana between 2011 and 2014, and since 2015 in Zagreb. Bekim Sejranović translated several works from Norwegian into Croatian. In 2002 he published the collection of short stories, Fasung. This was followed by the novels Nigdje, niotkuda (2008), for which he was awarded the renowned regional Meša Selimović Literary Prize, and 4 other novels. His works have been translated into English, German, Italian, Macedonian, Norwegian, and Slovenian. Bekim Sejranović died on 21st May 2020 in Banja Luka, aged 48.