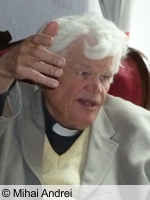 Eginald Schlattner, was born in 1933 in Arad (Romania) and grew up in Făgăraș at the foot of the Carpathian Mountains. He studied theology in Cluj-Napoca but was expelled and studied then Mathematics and hydrology. In 1957 he was arrested and in 1959 convicted of “non-notification of high treason”. After being released from prison, he worked as a day-labourer and later as an engineer. In 1973 he continued the study of theology that he had to break off. Since 1978, he has been working as a prison chaplain in Rosia near Sibiu.