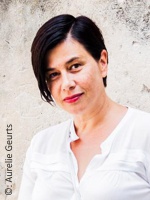 Olja Savičević-Ivančević was born in 1974 in Split. She studied Language and Literature studies in Zadar and works as a columnist, literature critic and editor. She has published three volumes of poetry, which were selectively translated into several European languages. Her story volume, Nasmijati psa, which appeared in 2006, was hailed as the best prose of young Croatians by the daily paper Vijenac and the Zagreb publishing company AGM. In 2007, the author received the reknowned Ranko Marinkovic Award of Večernji newspaper.