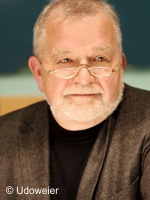 Rüdiger Safranski, born in 1945 in Rottweil, studied German, Philosophy, History and Art History. In 1976 he completed his dissertation in German and Philosophy. From 1972 to 1977 he worked as an assistant lecturer in the Department of German at the Free University Berlin and from 1977 to 1984 as a lecturer in adult education. Until 1981 he was co-editor and co-publisher and editor of the cultural-political journal Berliner Hefte, in which he published essays on literature, politics and philosophy. Since 1985 Rüdiger Safranski has worked as a freelance author in Berlin. Together with Peter Sloterdijk he is the host of the “Philosophical Quartet” on the ZDF TV programme. Awards: the Leipzig Book Fair Prize (2005), Hölderin Prize (2006).