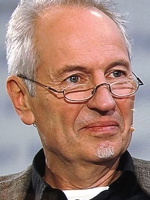 Eugen Ruge, born in 1954 in Sosva under the Ural Mountains, studied Mathematics in East Berlin and became a scientific collaborator of the Central Institute for the Physics of the Earth. He began writing in 1986: he wrote several short theatre plays, some of which were later staged. In 2011, he published his debut novel In Zeiten des abnehmenden Lichts (title of the English translation: In Times of Fading Light). The book was instantly critically acclaimed, earning Ruge the 2011 German Book Prize.