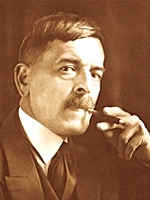 Charles Ferdinand Ramuz (1878-1947) was a Swiss writer, poet and essayist and is regarded as the most important representative of the Swiss literature written in French. C. F. Ramuz was born on September 24th, 1878 in Cully-sur-Lausanne. After the Collège classique he visited gymnasium and was enrolled in 1896 in the Faculty of Arts at the University of Lausanne. Around 1900, he spent for the first time some time in Paris to continue his studies. He moved to Paris completely in 1904 to write his doctoral thesis on the work of the poet Maurice de Guérin. It was in Paris where he met his future wife Cécile Cellier with whom she had one daughter. In 1914, he left Paris and returned with his family to Lausanne. He published numerous works and won many awards, including the Grand Prix of the Swiss Schiller Foundation in 1936. He died in 1947 in Pully in canton Vaud.