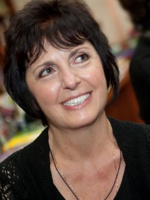 Teodora Dimova, born in 1960 in Sofia, writes novels and theatre plays. Her plays have been staged in Bulgaria as well as internationally. She was a fellow at the Royal Court Theatre in London. Besides writing for theatre, she has also published several novels. Her best-known work is the novel Майките, for which she received the Grand Prix for Eastern European literature in 2006 in Vienna. The novel has been published in several editions and translated to several languages.