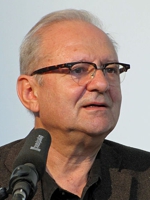 Dan Diner was born in 1946 in Munich. He is professor of Modern History at the Hebrew University, Jerusalem, and director of the Simon Dubnow Institute for Jewish History and Culture at the University of Leipzig. Dan Diner wrote numerous books on the political history of the 20th century, on the history of the Near East, and on the Jewish history. He received several awards for his works, including the 2013 Leipzig Science Prize and the 2013 ERC Advanced Grant.