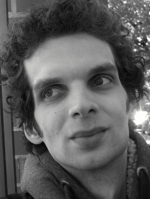 Ilija Đurović, was born in 1990 in Podgorica. His first short story was published in 2009 in the literary magazine ARS. After that, he wrote many pieces for literary magazines and web portals. In 2014, his first book of short stories was published, Oni to tako divno rade u velikim ljubavnim romanima, which got very positive reviews. In 2015, the well-known American Anthology “Best European Fiction” published the English translation (by Will Firth) of his short story Five Widows. He is a back-to-back winner of the literary short story contest “A Sea of Words” in Barcelona in 2010 and 2011. Ilija Đurović writes reviews, commentaries, and columns for newspapers and magazines in Slovenia, Montenegro, Serbia, and Croatia. Since 2014, he has been working for the independent publishing house Žuta kornjača from Montenegro, for which he has translated several theatre plays by Thomas Bernhard. He lives in Berlin since 2013.